STAND BACK! You won't see much close up.

All layers activated in Rebelle prior to exporting to Photoshop

Three Andromedans: This layer alone took me almost an hour.

I suggest that you stand about 7 feet away from the image to appreciate this work.

This piece started out with my making the acquaintance with three beings currently native to Andromeda. Again, a combination of plant and animal, they showed themselves to me as sort of ribbon-like entities that moved around as if they were suspended in water. Imagine a rope tied underwater; those were the movements these beautiful beings made. The purple layer above is the "portrait" they gave to me to paint, and it was a stretch of patience to draw what I saw. As quasi-physical beings, their bodies are comprised of plasma, which is much more malleable with the surrounding environment than we believe our own bodies to be, so they kept disappearing and re-appearing in their neighboring environment.

Despite all being sentient, the one on the left is the most self-aware of the three. The middle entity was much younger (in human terms but also in adeptness at maneuvering in that world), and the being on the right is actually a pair, bonded, that identifies as one. They wanted me to represent the challenges (maroon) and rebalancing (purple) that were active at the point of their bonding. To remind us that we are always evolving, no matter what form we take. We're never finished...but we may get bored with a particular form, and yearn for the experience of another. If you can imagine it, you can take that form.

This piece was drawn in 7 layers, with each layer turned off as soon as I was finished. Always drawing on a blank canvas!

It was surprising that after my spending nearly an hour on the portrait, that my new friends were perfectly content to fade into the background as the painting revealed itself. This represented the view that even if one is not in high profile, every contribution is valid, worthy and beautiful.

The Carpet Hunters are a multidimensional group to which I belong, and it consists of (to the best of my awareness so far): Humans, Reptilians, Andromedans, and some very patient Pleiadians. They coordinate my meeting with new species when my evolution calls for some stretching of boundaries.

The subject matter was decided upon by all those co-creating this piece (3 Andromedans, a Multi-Galactic named Flora, and a Pleiadian cheerleader who kept me focused on maintaining the connection. The second level concept of this piece is that of a DJ that not only creates music, but also an associated mood through atmospheric change, temperature variations, and of course, lots of light. I saw the process by which he did this, but I am unsure if we have the technology on Earth at this time to duplicate it. We probably do by now, somewhere.

Created in Rebelle 3 on rough linoleum, and finished in Photoshop 2021.

I do notice that there is a resemblance to the Plasma Snake I drew earlier this year, but that connection was much fuzzier than the connection necessary for this piece.
Plasma snake portrait: https://kimberlydarwin.com/projects/gJYzDQ?album_id=1134927 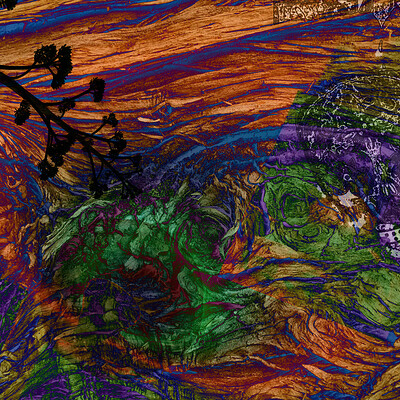 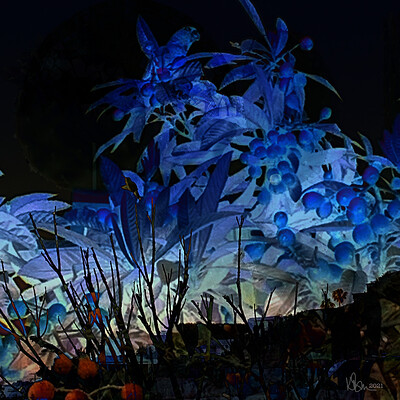 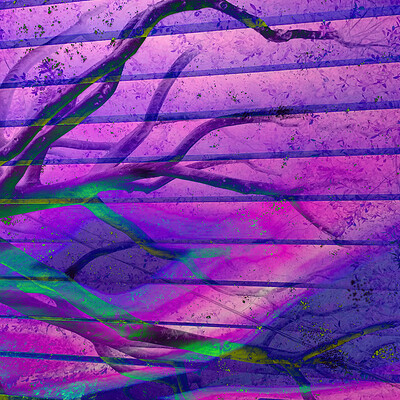