Instructed to remove some shapes from layers in Photoshop Mix

In go some photos from a recent visit to my hometown in Bucks County, PA.

So while my fellow Tipsy Mystic Maranda were having drinks on the patio in her backyard in Philadelphia, I looked under a tree and there was an energy I'd never encountered before. What you and I might call Sasquatch, but really just a beautiful human that had evolved on a path devoid of DNA manipulation. Meaning, that if humanity hadn't been tinkered with, we would have evolved into unadulterated multidimensional nature geniuses. One with the environment, and with massive power.

He initiated contact with us regarding the AwakeCon conference, for apparently the Faeries want in on this venture. Our large friend acts as their ambassador; very protective and supportive of the elementals wishing to collaborate.

But it was made clear: Intentions are paramount. They are not averse to an occasional "party trick" if it aids humanity in recognizing their own latent multidimensional abilities. (Insert squee here from conference producers). Yet since this is the first time this group has reached out to humans, they are cautious. Free will is serious shit, and crossing that line brings its repercussions.

Here's me, with untouched sangria in front of me...wondering if I have the pureness of heart to be the bridge for this group.

But....faeries! I mean, who wouldn't want to clear out every last muon of blocked energy from this existence in order to hang out with faeries?

This artwork is a loose self-portrait of our Sasquatch, who Maranda has lovingly named The Bodyguard. He's surrounded by a "selection of faeries" that appeared as if they were sitting on shelves, for added comic relief. The white lights hovering in front of the stone wall are how the pixies wanted to be shown; they started with a fully-filled layer and erased until they appeared.

Created in Clip Studio Paint from original photographs of Bucks County and Philadelphia, PA. Some layers were mixed in Photoshop Mix. Minimal painting on my part save for the pixies, the faeries and a few lines. 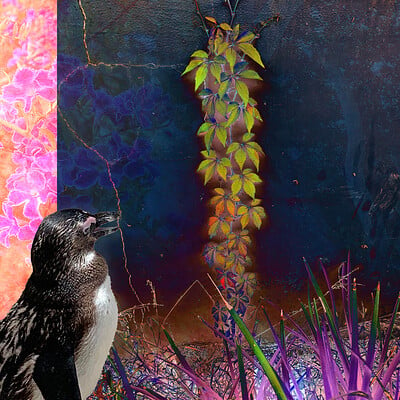 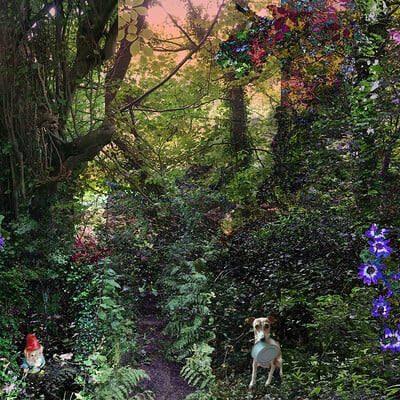 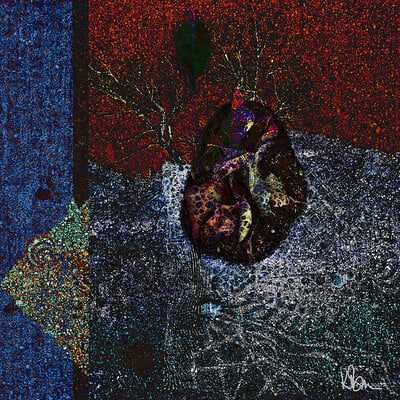