The original watercolor in Rebelle

Used 7 squares from original painting, plus the whole painting as a background

The Window is the second in a series of collaborative works with Azior, a Reptilian with a life focused during the time of Orion Light. As mentioned in the first piece in the series, Azior has a human counterpart here on Earth. So there are more than two of us involved in this creation.

The Window was created to represent the levels of consciousness that humans have intentionally separated their physical selves from while living Earthly incarnations. In the first work in the series, we started in the Basement, where human fears and impossibility lie. If one went back through the door and up to the next level, one would reach this blue level, where the Higher Self hangs out hoping you'll pay attention to the messages, whispers, and guidance that waits there.

So you'll see the physical representation in the lower left, leading through the door to this next ethereal level...the one that has access to both the physical to some extent, as well as higher levels as we integrate. From that level, you'll see the Window leading even further along, represented by the LIght. And just as a bonus, our friend Azior put his reptile self right there in the window for us, just to show you there's nothing to fear. You're just moving through a rash of lies, and you'll realize the illusion soon enough.

After I created the initial painting, I cropped squares from it, layered them, and they snapped themselves into place. The only post-painting additions I did were to accentuate the tongue and tiny highlights at the bottom of the piece. Everything else fell into place without my conscious self getting involved. I was just in the passenger's seat, observing the process.

To see the first in the series, visit https://awa.ke/thedoor 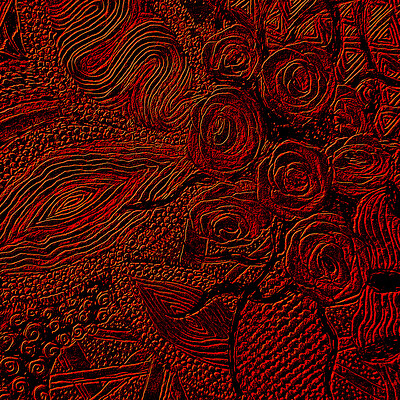